Now that we know that the engine will run, I’ll continue the work with the hit and miss governor.

The governor works with holding the exhaust valve open, when the engine is above governing speed, interrupting the four stroke cycle, and allowing the engine to coast. Once the speed decreases, the governor latch will release, and the engine will fire again. The term Hit and Miss is from the distinctive sound the engine makes while running.

I’m starting the work with the governor weight arms. The arms translate the centrifugal force of the flyweights into a linear motion. The “fingers” of the arms grab into the spool to convert the motion from rotating to non-rotating.

First, I machined the contour to finished size, milling a bit deeper than the thickness of the finished parts, to allow for the second side to be finished later. 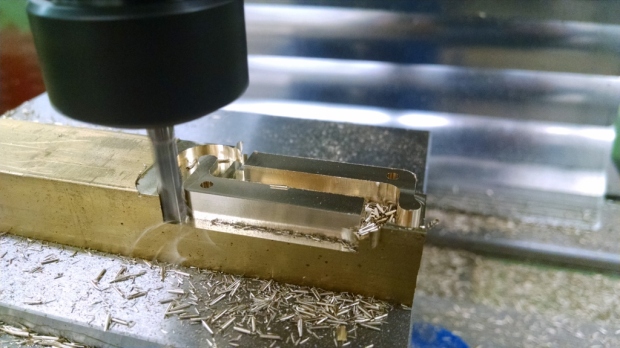 Unfortunately I didn’t have fitting brass stock and ended up wasting a lot of material when I machined the back side off to cut the two pieces free. A slitting saw would have been an option to save some material, but I didn’t have a fitting one on hand.

After cutting the pieces free, I finished the second side to the final thickness.

The last operation was to cut a round mounting boss, where the wights will be mounted on. I clamped the square part very gently in a round collet.  That’s not ideal, but as long as none of the edges end up in the slots of the collet, and the collet doesn’t get cranked down too hard, it works alright. 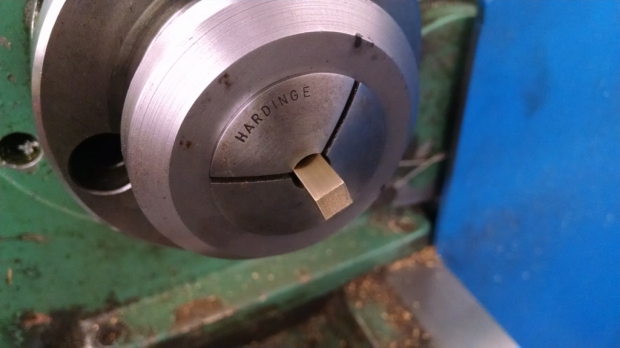 The spool was a straight forward turning job.

The arms and spool together. 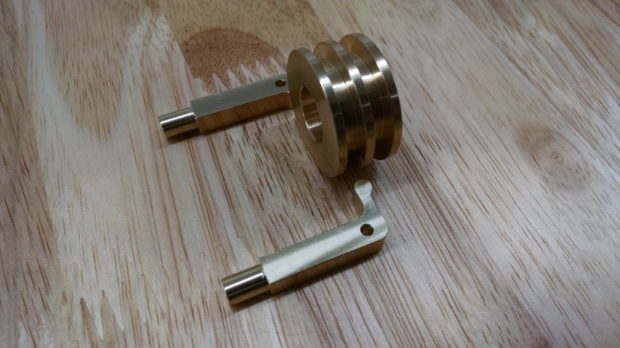 Next, the fly weights. The weights have a recess to fit around the hub of the flywheel. The first operation was to mill the recess with the same radius as the hub on the mill.

Then, I moved over to the lathe and finished the outside diameter to size and parted it off.

Last operation is to drilled and tap the holes for the set screws. This will also provide a mounting location for the springs.

Thank you for visiting my shop.

If you have any questions, please feel free to leave a comment and I’ll get back to you.